On Reserves Day and every day we're proud of our Reservists

Wednesday 21 June is "Reserves Day" in the UK: an opportunity to celebrate the valuable contribution Reservists make to our Armed Forces. Read about ITI employees and Reservists Ben Dunker and Tim Storr. 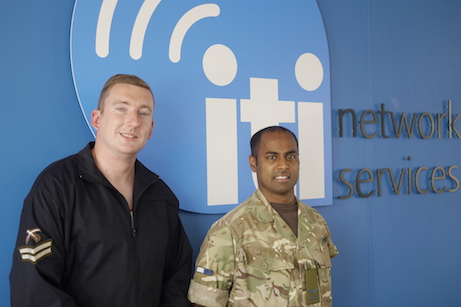 ITI has long recognised that current and former Armed Forces staff offer significant expertise, commitment and transferable skills to our business and help us provide an exceptional service to customers (read more about this here). We're committed to supporting and developing all of our staff; around 50% of our PAYE employees are either Veterans or Reservists.

ITI Commercial Director, Dave Newton, says "The Reserve Forces make an outstanding contribution to the Armed Forces. ITI value the skills Reservists can bring; we support them through our commitment to the Armed Forces Covenant."

Cpl Ben Dunker, a store administrator at ITI, is contracted as an Army Reserve Recruiter as well as a Reservist, so works 5 days a week as a soldier and 2 days at ITI. He also competes for his unit in military running and loaded march races, and co-ordinates and conducts large scale recruiting events.
Ben says, “The Reserves are fantastic for all ages ranges – you get great life skills and it enhances your qualifications. Businesses should support employees in the Reserves because it massively enhances your staff capability.”

Lance Cpl Tim Storr is a store administrator and works in network engineering at ITI.  “The really good thing about the Reserve is the choice. I’ve done both regular army and Reserves, and the Reserves has got so much more capability to be flexible. Vice versa with my civilian job - I can say I need to do this, and they [ITI] are really good at letting me do my Military stuff as well.”

About The Reserve Forces: Reservists give up their spare time to serve in the Reserve Forces, balancing their civilian life with a military career. Reservists play a central role alongside Regulars to meet Defence requirements, particularly providing capability in specialist areas such as medical and cyber. Reserve units are increasingly paired with and train alongside Regular units and, when required, may deploy on operations with them. Reservists now have access to the same equipment and technology as Regulars and receive high-quality, challenging training, including more opportunities to train overseas.

The Reservist community is diverse: Reservists come from all parts of the community and all walks of life. Reservists are currently supporting operations worldwide including in Afghanistan, countering the threat of Daesh in Iraq, UN peacekeeping in Cyprus, as well as global counter-terrorism and counter-piracy operations and defence engagement tasks worldwide.

Have a listen to this interview (MP3 file, opens in new tab) with ITI's Reservist employees Ben Dunker and Tim Storr.